The first Indonesian Youtube video to hit 100 million views was a music video published in 2016.

It’s from a major music label, but clips from self-made Youtube stars like Reza Oktovian and Agung Hapsah have also been seen by millions.

Developing countries in Asia-Pacific are expected to contribute significantly to the growth of online video globally, as mobile broadband becomes ubiquitous.

Where people are paying attention, there are others wanting to divert some of it to their benefit. Marketers now think there’s a way to increase the number of people buying products right after seeing them in an online clip – with “shoppable” videos.

They let you click on something you see in the video – say you like the dress someone’s wearing. A pop-up window with product information opens and you can buy it on the spot.

In May, Instagram began testing shoppable videos with some brands, apparently with encouraging results.

Straight to the bottom line

In the past, video marketers would have layered ads on top of popular videos, in the hope that someone clicks. Or they paid video creators – so-called influences – to feature products in the video, betting on the effect that viewers will associate positive things with the brand and buy it later. Or the video itself could include a call to action, like asking viewers to visit a website.

All of this works to some extent, says Raj Sunder, founder and CEO of Singapore-based startup Wootag. But the number of views a video gets online can be faked, so you may end up paying for your ad to be seen by bots. And there’s always an element of uncertainty when measuring how much a video campaign contributed to sales, he says. Wootag is a cloud-based software that lets you enhance your videos with clickable hotspots that lead viewers into a purchase process. You can run them as an ads on a news sites, or post them to social media like Facebook and Twitter. Instagram and Snapchat are not yet linked up with Wootag.

Data about the viewers and how they interact with the videos across its different instances then flows together on Wootag’s dashboard.

This allows a better understanding of who the viewers are and what they like, and what type of viewer is most likely to make a purchase, Sunder says. “You can draw a direct relationship between marketing expenditure and bottom line.”

The software has been used in ads for brands like BMW and Coca Cola. Collectively, “wootagged” videos have been seen by 5,000,000 viewers in the 12 months since launch, says the firm.

“It’s quite an advantage to be here in Southeast Asia. It helped us build a good product-market fit both for developed and emerging markets,” Sunder says.

Eventually, Wootag wants to expand globally, but In the coming months, Sunder wants to pour resources into product and technology to make sure the platform is ready to scale. The firm just closed a US$2.7 million in a pre-series A funding round led by Euco Investment, Wavemaker Partners, and SPRING Singapore.

It’s on the cutting edge of video marketing, with few firms playing in the same niche. Firms like US-based MikMak or Touchcast show some similarity with Wootag, but they address more specific use cases.

Sunder compares Wootag with integrated video marketing platforms like Innovid and Vidyard. “These are the guys we look up to,” he says.

Clickable videos aren’t new, in fact, everyone can create one on platforms like Youtube and Vimeo for free.

They just haven’t found massive adoption yet. Brands are just getting the hang of working with regular online video formats.

“Despite working on around 60 video projects per week, right now we don’t have any data for these type of clickable videos, as no clients are requesting these formats,” says Patrick Searle of Indonesia-based content marketing firm GetCraft.

“As we speak, brands are just starting to understand the potential of paid video marketing whose primary objective is brand awareness. Rarely do they explore inbound video marketing where product conversion is the ultimate objective,” explains Searle.

That might change once companies like Wootag can prove their videos are driving sales at much higher rates than the industry norm – and deliver a treasure trove of data about how users engage with a video on top. 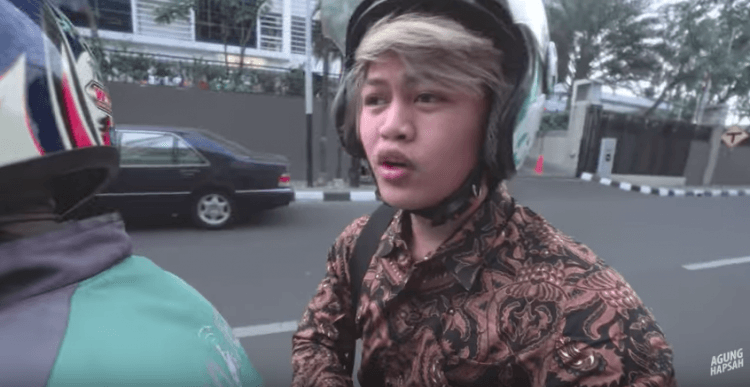 Scene from a video by Agung Hapsah, one of Indonesia’s up and coming Youtubers.

A sponsored video from an influencer or publisher on behalf of a brand would be considered well-performing if 1.5 percent of viewers would proceed to click an associated link, and 0.5 percent would proceed to a purchase, Searle says.

Wootag says looking at its data, 23 percent of viewers clicked on a hotspot in the video, and 6 percent proceeded to add a product to a shopping cart. It didn’t say how many of those led to a completed purchase.

Searle thinks the technology has potential because it removes the need to pay video creators to specifically mention links. “Given that this technology is more native to the video format, it should produce as good, as if not better results.”

Tagging clothing is an obvious use case, but it’s not the only one, Sunder says. Wootag has seen success working with clients in consumer goods, where groceries featured in a cooking tutorial could be purchased right from the video. Or with sports clips that let viewers buy tickets for an upcoming match.

The possibility looms that Instagram makes shoppable videos a native feature, which could limit the ways it allows third-party software like Wootag to interact with its 800 million monthly active users.

But Sunder welcomes any moves by Instagram and apps like Snapchat because it helps take the interactive video format mainstream.

“If Instagram does that, it’s good for us,” he says. “We will think about how we can bring videos to different channels, and bring the data together on a single dashboard. Wootag complements all the channels.”