There are many today who say that technology has already revolutionised the most important aspects of the automobile industry, and that all current innovations are mere ‘enhancers’ – they make for good consumer experience, but one wouldn’t miss too much without them.

Be that as it may, tech is still stirring things up in the consumer auto industry, even if it does not have anything to do with the making of an automobile itself. Take, for instance, ride-hailing. Taxis have always existed, and so have customers who hail them. All tech did was give users an assurance that, no matter where they are in any city that’s served by a ride-hailing service, there will be a cab to pick them up at the click of a button. Technology also organised existing taxis on the road, and brought them under one umbrella so they’re readily available on what we call a ‘marketplace’, or ‘platform’ today.

One such platform is Malaysia-based Carsome, which brings car owners and used-car dealers together on one platform.

Typically, if one wanted to sell their used-car, they had to go through the long, arduous process of first getting their car checked and evaluated to see if it was working fine, and then visit several local, individual dealers to negotiate a reasonable selling price for the used car.

Also, one had to visit several dealers to get different quotes so that they had the option of picking the highest one.

Carsome pitches itself as a one-stop shop for all those processes. It inspects the car in-house, and then invites bids from dealers on its platform. The company also takes care of all the paperwork on both sides.

“We are trying to solve the problem that both the used car dealers and retail mom-and-pops face; reliant on brokers to buy/sell a used car, resulting in a considerable discrepancy between buying and selling price, where most of the profit goes to the middleman. Not to mention the hassle one has to go through to just getting their car sold,” says Eric Cheng, co-founder and chief executive officer of the company, in an interview with Entrepreneur Asia Pacific.

“Dealers are actually increasingly using us to source for their inventory without the worry of problematic cars, and sellers are coming to us to sell their car due to the hassle-free journey as well as our transparent pricing mechanism,” he adds.

Carsome has raised more than $85 million over six funding rounds, from investors including MUFG Innovation Partners and Convergence Ventures, according to Crunchbase

The company today boasts more than 6,000 used-car dealers, in the regions where it has a presence.

But one of the biggest challenges it faced during its initial days was convincing the market that their platform could be trusted, and help connect sellers with buyers.

“Getting dealers and sellers to actually use and trust this new product in the market was not an easy task, especially since we were the first movers in this segment,” Cheng says.

“It took much time to build the trust that our inspection standards and reports were up to standard, and reliable enough to make business decisions for dealers.”

The company currently has a 4.7 out of 5 rating on Facebook, from reviews left by 2,169 users

The company already has a sizable presence in Malaysia, Indonesia and Thailand, and, at the moment, Carsome said it was focused on strengthening its market leadership in those three markets.

The company closed in $50 million series C funding round in December, last year, proceeds from which it expects to use to expand into more Southeast Asian cities, such as the Philippines, and building a more well-rounded used car ecosystem that covered buying/selling, financing, insurance, and even underwriting warranty for used cars.

“Our vision is to create an end-to-end auto marketplace platform in the region that will deliver the best experience to both our dealers and consumers,” he said.

The company is currently operationally profitable in Malaysia, but not the other countries it is present in, although it expects to turn a profit in those markets by the end of 2020.

Philosophy Behind the Company Name

The name ‘Carsome’ combines ‘car’ and ‘awesome’, which is the standard of customer service the company aspires to provide to its customers, Cheng tells us. 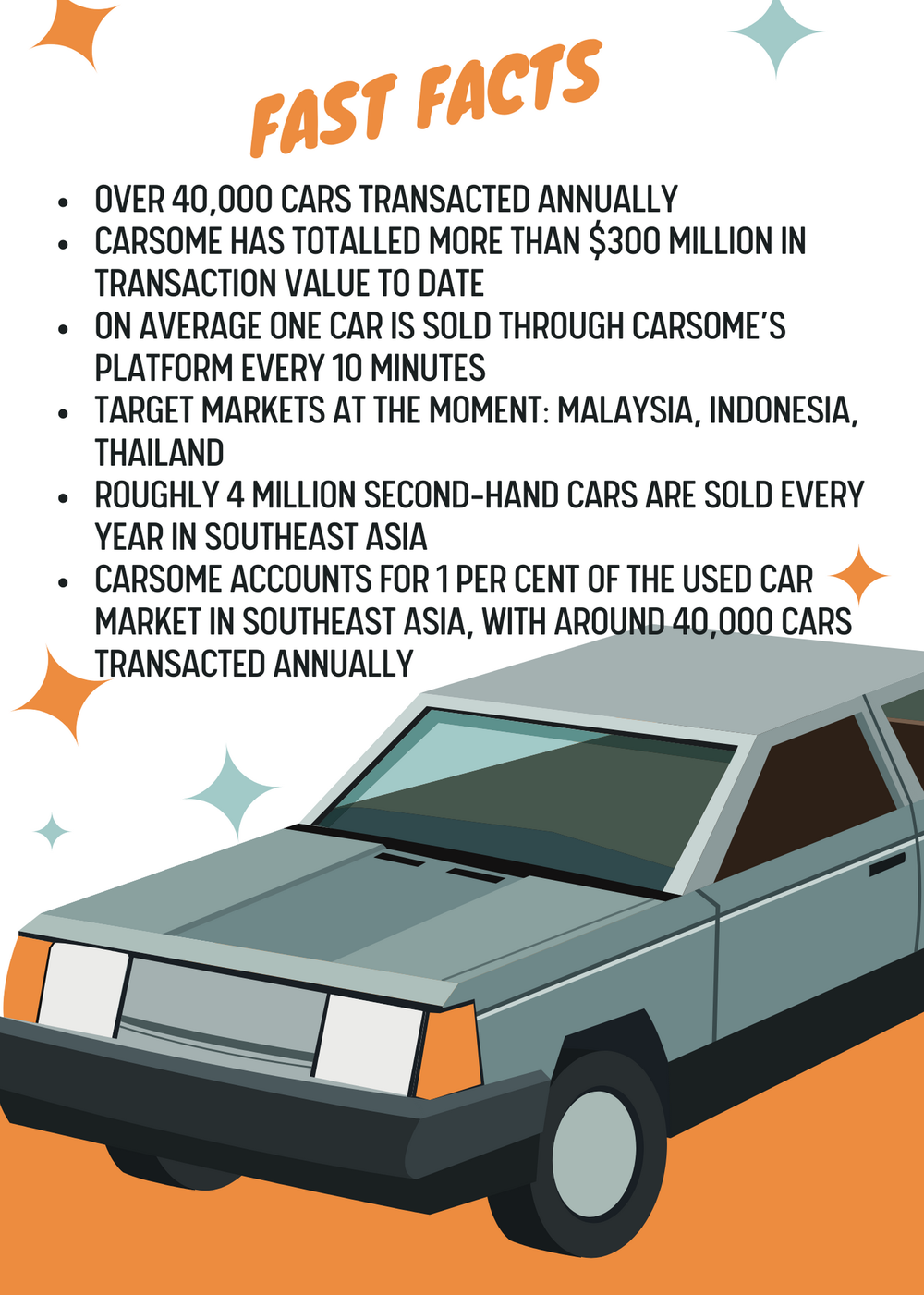